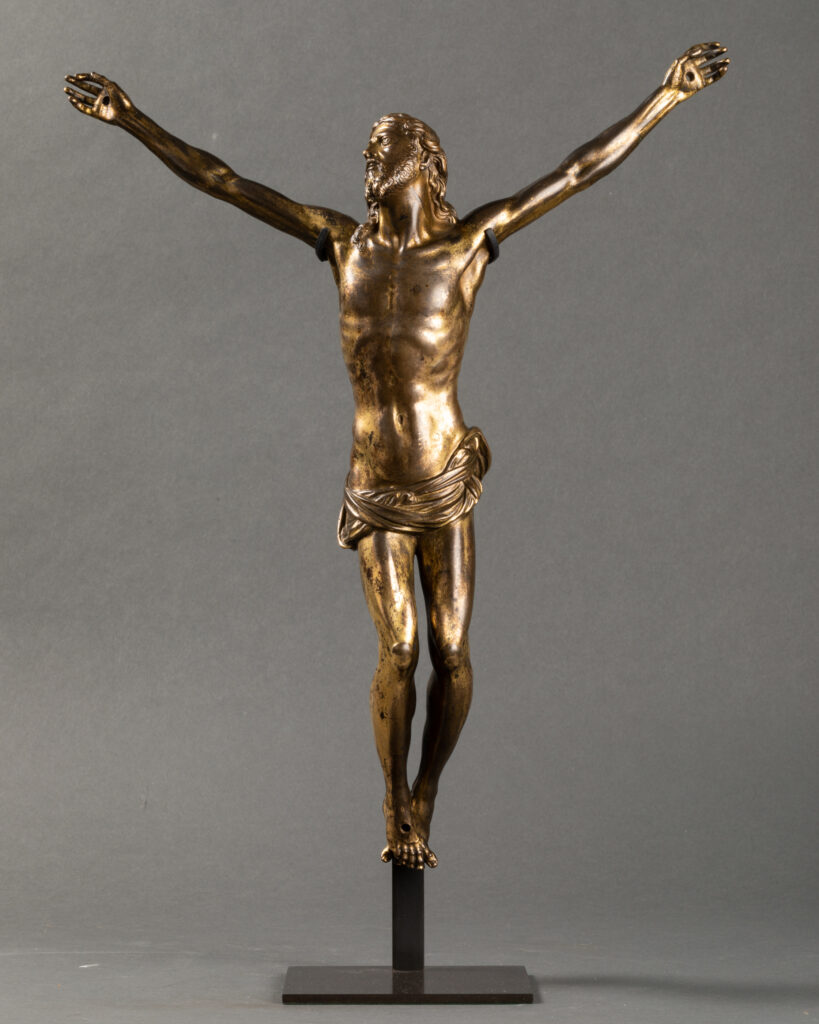 This splendid Christ was made in Tuscany, Italy, at the beginning of the 17th century. The work in bronze gives Christ an idealized physical appearance, made possible by the great precision and profusion of details.

Particular attention is paid to the chiseling of the hair, the beard and the features of the face, which shows a great artistic sensitivity. Despite Christ’s protruding ribs, the torsion of his exhausted body and the tension of his muscles in agony, a real serenity emanates from this work. Stripped of all divine character, to be only a man, Christ is dressed only in the traditional perizionum, draped with strong folds, leaving one hip uncovered.

This piece is to be compared to the corpus of the plastic artist Giambologna (1529-1608). Born Jehan de Boulongne (in Flemish) or Jean de Bologne or Boulogne (in French) in Douai in 1529, he completed his apprenticeship with the sculptor Jacques du Brouecq (1505c.-84) in Flanders. Around 1555 he left for Italy, where he was called Giovanni Bologna (later changed to Giambolonia). A complete artist, both creator of sculptural and iconographic models, he created a large body of “Corpora Christi”. The great success of his works is mainly due to his school. Indeed, it is most likely that Giambologna was the originator of the initial models, drawn and sometimes created in large format, and then executed by his pupils, or successors, in small formats intended to be offered, as diplomatic gifts for example (notably by the Medicis). This delegation of production to his workshop, allowed him to disseminate his models, made in greater numbers, especially in the late sixteenth and the first decade of the seventeenth century. Some members of this workshop stood out, and became famous. This is notably the case of Antonio Susini who worked there from 1570 and to whom a large number of castings are attributed.

As said before, Giambologna not only creates emblematic sculptural figures, he also designs subjects. He began his production with the model of a “Cristo Morto”, presenting the dead Christ with his head bowed in sorrow, in reference to the biblical passage “My God, my God, why have you forsaken me? “(Matthew 27:45, Mark 15:34). This is the representation favored at the end of the Middle Ages, whereas the previous centuries, from the first representations of Jesus on the cross in the 6th century, had favored a Christ still conscious, without pain, with his eyes open, but looking towards the spectator and rarely turned towards heaven. The break with this tradition occurred on the occasion of a drawing by Michelangelo, circa 1540, for Vittoria Colonna, kept in the British Museum, London. Jesus Christ is then presented worried, imploring heaven but very much alive and with his face turned towards heaven.

It is in the continuity of this new model that Giambologna created his “Cristo vivo” around 1590. He abandons the pathetic aspect in order to give it a new grandeur, that of acceptance, as it is transcribed in the Gospel according to Saint Luke (23:46): “Father, into your hands I commend my spirit! “. The son of God is then represented free of all suffering, offering himself to the will of his divine Father, towards whom his gaze is turned, and appeased by the knowledge of his resurrection.

Moreover, this evolution of the subject is closely linked to its context of creation. Indeed, the Council of Trent had a great impact in the world of the arts, forcing artists to revise their creations, in order to adapt them to the new religious precepts that the Council favored. Among them, the renewed importance of the mystery of the incarnation and the assurance of eternal heavenly happiness enabled by the resurrection is paramount, requiring new images to celebrate it. The work of Giambologna and his workshop is particularly demonstrative of these theological questions, where the viewer must be invited to share in the Christian beatitude and this divine meditation, according to the model of “Imitatio Christi”.

Only two versions of “Cristo Vivo” have been attributed with certainty to the master, or his nearby workshop. One is kept in the Monastery of Descatras Reales in Madrid and the second was sold by Sotheby’s on July 9, 2004 (lot 7). The quality of our piece leaves no doubt about its proximity to the workshop of Giambologna. Our Cristo Vivo would certainly be due to a production made by one of his successors, on the model of the artist, concrete example of the influence as well as the success that this figure knew. Moreover, this reference model transcends the sculptural world to impose itself in that of painting, as proven by Guido Reni’s crucifixion corpus.