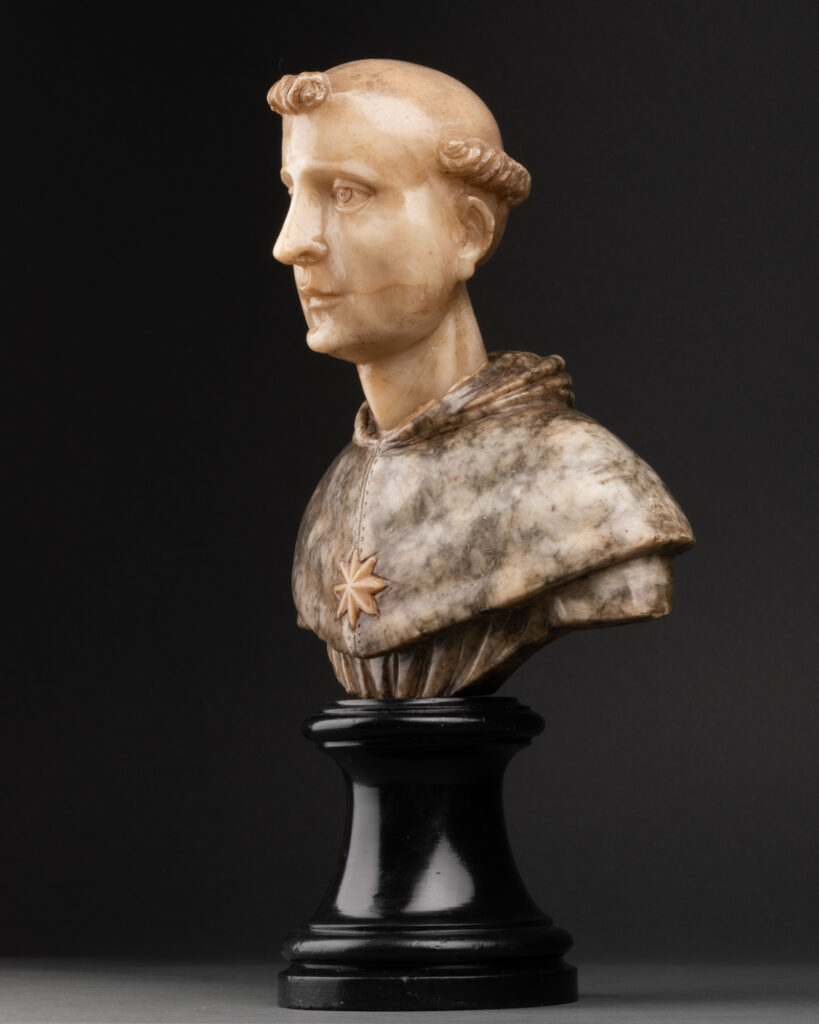 This charming alabaster bust represents a man wearing the tonsure and the attire of the Dominican friars: a scapular (a sleeveless piece of cloth that rests on the shoulders), a hood and a tunic that can be guessed. An eight-pointed star adorns the front of his suit. All these iconographic elements indicate that this bust represents Saint Dominic.

Dominic Nunez de Guzman was born around 1170 in an austere village in what is now the Spanish province of Burgos. A Catholic religious, he was the founder of the order of friars preachers, more commonly known as “Dominicans. Dominique studied theology and philosophy and took the habit at age 25. While accompanying a Spanish embassy to the king of Denmark, he crossed Occitania and encountered the Cathar heresy. Dominic quickly decided to fight the “good men” at the request of the pope and therefore settled in Languedoc with the mission of evangelizing the territory. When the Albigensian crusade was launched in 1209, Dominic followed the crusaders to obtain conversions. Wanting no other weapons than persuasion, prayer and good example, Dominic will not take part in the war and massacres, making him a pacifist figure to be contrasted with Simon de Montfort, leader of the crusader army, who exterminated the Albigensians by iron and fire between 1205 and 1215.

Inspired by the recently established order of Francis of Assisi, Dominic founded the Order of Preachers in 1216. Dominicans are invited to learn without ceasing and to follow the rule of Saint Augustine. The order gives an important place to prayer, meditation, must practice begging, must have neither income nor property (except the convent and the books which are property of the community). Very quickly the first brothers were dispersed in the large university cities where they became known for the quality of their teaching. One year after the death of their founder, the Dominicans are involved by the pope in a new method against heresy: the Inquisition. Because of their solid dogmatic training, the Dominicans provided a good number of inquisitors until the 14th century, thus participating in the persecutions against the Cathars, the Templars, the Beguines and the Jews; in spite of Dominic’s precepts who fought only by preaching.

According to legend, while she was pregnant with him, his mother had a dream that she would give birth to a son who would enlighten the world, which is why Dominic is often represented with a star.

This piece offers us two types of alabaster called calcite: finer and more delicate, with visible veins and a greater variety of colors. Used since antiquity in many types of productions but slightly abandoned in the sixteenth century in favor of marble, alabaster remains appreciated for the manufacture of vases and statues of small size.

The choice of two different types of alabaster, the fineness of the chasing and its dimensions make this bust an object of private devotion, a beautiful intimate tribute to an important saint.