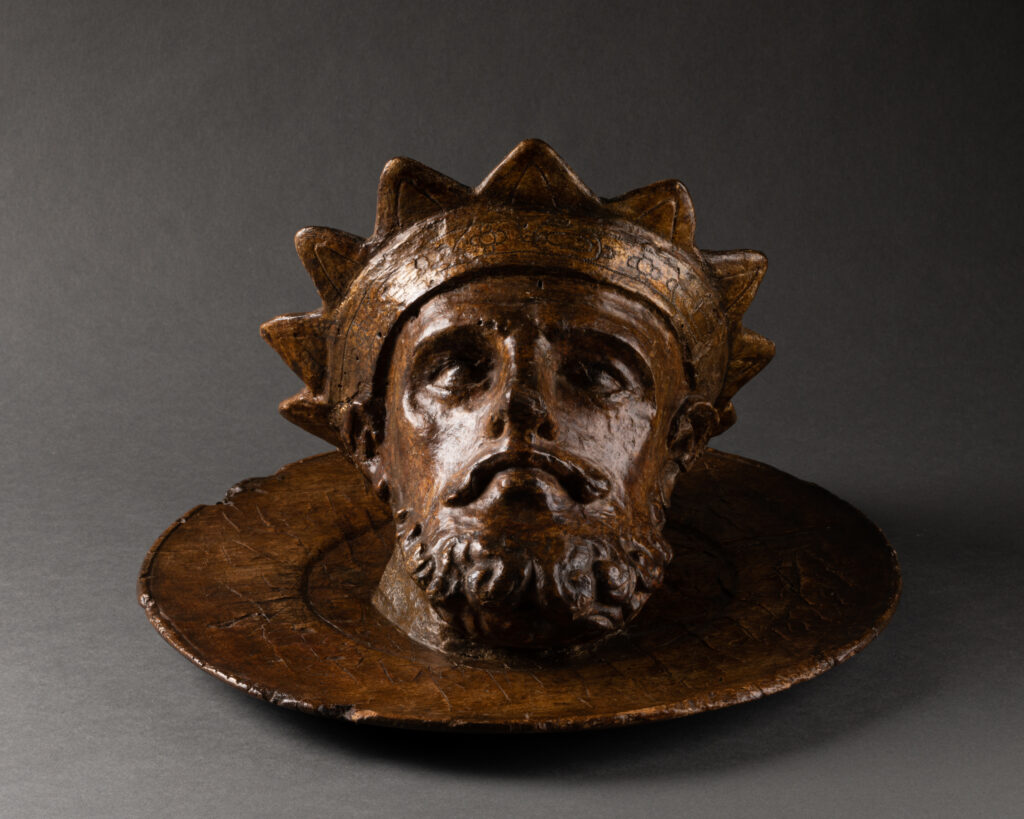 The viewer may at first feel confused in front of such an object. This impression undoubtedly comes from a paradox: the quietude of the saint with his extremely calm and fixed gaze, the softness of the warm colors of the wood tinted with traces of polychromy and gilding, the visual harmony linked to the association of simple volumes (a head in a tray, it is a circle in a circle)… All this contrasts sharply with the extreme violence of the representation describing the aftermath of a sordid crime, namely the beheading of Saint John the Baptist ordered by Herod. The horror is not instantly perceptible from a formal point of view, but it strikes the viewer at the very moment he becomes aware of the subject represented. From then on, the fixity of the saint’s gaze, which seems to stare at us, disturbs and questions. In the same way, when one gets closer to the work, the asperities of the wood, induced by the passage of time and the traces of polychromy, take on a new meaning. They seem to echo the harshness and brutality of the biblical story, as if the evocation of horror was more to be found in the details of the work, than in its totality. Finally, the dehumanization of one of the greatest figures of the Gospels, who becomes here an object offered to the eyes in a kind of morbid exhibitionism, paradoxically confers on the saint a fascinating and disturbing presence.

A transitional figure linking the Old Testament and the New Covenant, Saint John the Baptist is considered the last of the prophets and the first of the martyrs. Born of the union of the priest Zechariah and Elizabeth, the Virgin’s cousin, he belongs to the family of Christ. In the Bible, John is described as an ascetic recluse (Matthew 11:18). According to the Roman historian Flavius Josephus, he could have belonged to the Jewish movement of the Essenes, whose members lived in poverty and practiced asceticism. After a long period of “hidden life” – like Jesus – in the desert, John begins to proclaim, around the age of thirty, the “baptism of repentance for the remission of sins”, prophesied by Isaiah. His role is to “make straight the paths of the Lord”, to “prepare his ways” (Luke 3:1-6). The central episode in the story of St. John the Baptist is undoubtedly the moment when he baptizes Jesus in the Jordan River, recognizing in him the Messiah. Nevertheless, the event of his tragic death has also been the source of an extraordinary flowering of commentaries, beliefs and images during the two thousand years of Christianity.

Only the gospels of Matthew and Mark (Mt 14:1-21; Mk 4:14-29) relate the death of Saint John the Baptist. In both cases, only a few verses are devoted to it. According to the story, the governor of Judea, Herod Antipias, imprisoned John the Baptist, furious that the latter had dared to condemn his marriage to Herodias, the sister of his deceased brother. During a banquet, Herodias’ daughter Salome began to dance before her new father-in-law Herod. Under the spell, the man promised to grant her all her wishes. The girl then asked, on the advice of her mother, that the head of John the Baptist be delivered to her. The governor kept his promise and the girl presented her mother with the prophet’s head on a platter. Although the accuracy and verisimilitude of this passage from the Gospels has long been denied by historians, the death of St. John the Baptist gave rise to a multitude of beliefs within Christianity, all centered around the cult of relics.

In fact, between the 5th and 6th centuries, legendary accounts about the so-called discovery of the skull of St. John the Baptist were developed. These accounts were spread in particular through the Roman martyrology (a kind of collection listing the saints), which completes the biblical account while providing details on the death of the saint. According to the martyrology, the body of John was burned under Julian the Apostate to put an end to the cult of martyrs. But some monks collected the ashes to take them back to Alexandria. Finally, they found themselves in Genoa. From the 12th century, the existence of a relic of the head is attested in the imperial records of the Eastern Roman Empire. After the fourth crusade of 1204, the “skulls of John the Baptist” multiplied in the West, until they reached the number of twelve at the end of the Middle Ages. At that time, the most popular was undoubtedly the skull of Amiens, which would have been found walled in Constantinople by the crusader Wallon de Sarton. The multiplication of these skulls was at the origin of a particular devotion around the saint, which gradually led to the emergence of representations of the head of Saint John the Baptist, as an iconographic motif in its own right.

Thus, from the twelfth century onwards, the so-called trays of St. John the Baptist (or St. John the Baptist “in disco”) appeared as autonomous and mobile productions, which could be placed on the altar or carried in processions. In the 15th century, the “mobile” version of the tray became the most widespread. From this point of view, the shape of the plateau of Saint John is eloquent, since it requires that it be carried or shown. In the church, the tray was either covered at certain times of the year, or exposed, especially during the feast of August 29, which commemorates the martyrdom of the saint by decollation. It could also be placed on the altar during mass. This prominent place in the Christian liturgy is explained by the fact that the sacrifice of St. John the Baptist is seen as a prefiguration of the sacrifice of Christ. In this perspective, an amalgam is formed in the Middle Ages; the head of the Saint is gradually associated with the Eucharistic body of Christ, and the plate formally considered as paten.

Apart from the liturgical uses, there was also a great diversity of popular uses of these trays, linked to local beliefs. The heads of Saint John the Baptist had first of all a prophylactic dimension, since they were venerated in order to fight certain evils: those of head or throat, the menstruations of the women, the melancholy and the depression, the male sleep disorders

The heads of Saint John the Baptist were also sometimes invested with an oracular dimension. Thus, the devotion of the Lombard kings to the Baptist was such that they considered him an oracle who directed their conduct in all things. This role that they attributed to him is noted in a remarkable way in the formula of coronation of these monarchs: In oraculo S. Johannis Baptistae ferreo diademate de jure regni corono te (“By the oracle of Saint John the Baptist I crown you with the iron crown”). More generally, the use of a false oracular head called “of Saint John the Baptist”, placed on a plate, to which a “soothsayer” said to make render oracles, is recorded until the 17th century. This Christian practice can be seen as a re-actualization of ancient pagan rites centered around the severed head of Orpheus, which also had an oracular dimension.

The heads of Saint John the Baptist were also used at the end of the Middle Ages by the black penitents, a brotherhood of laymen in charge of accompanying the condemned to death to his ordeal, in order to give him a good passage to the afterlife. Indeed, this brotherhood was placed under the title of St. John the Baptist, one of the patron saints of prisoners, and soon adopted as its emblem the head of the Baptist in a dish, an image to which it attributed a functional role during its rituals.

Typically medieval representations, the trays called of Saint John the Baptist were generally made of pieces of polychromed wood, terracotta, noble metals or paper mache.

Here, our tray is made of wood, with traces of polychromy and gilding. The initials “C.J” engraved on the back of the tray are later than the work. They must have been affixed later, by an owner or a collector.

As for the head, it has two original characteristics that distinguish it from the rest of the production of the cut heads of Saint John the Baptist. First of all, the saint’s eyes are wide open and seem to stare at the viewer, whereas he is usually depicted with his eyes half-closed, as if he were still expiring, or closed, as if he were already dead.

Secondly, its head is surmounted by a crown with chiseled geometric patterns, which also testify to the beautiful finish of the work. However, St. John the Baptist is not usually depicted with a crown, his usual attributes (the camel’s hair mote, the cross and the lamb) referring instead to his poor and simple life as an ascetic. The crown could be an effective way of representing the pre-eminence of the one whom a liturgical hymn, sung during the feast of the nativity of the Baptist, proclaims “the summit and crown of the prophets”. Indeed, Saint John the Baptist is invested by Christianity with an unquestionable pre-eminence over the other saints.

Finally, this tray of Saint John the Baptist in disco belongs to a production of objects halfway between art history, religious history, and cultural anthropology. The striking aspect of this sculpture comes as much from its anchorage in a biblical story with narrative details capable of easily striking the imagination, as from the way in which the artist knew how to seize this story to make a work of originality. Everything seems explicit in this representation: the severed head evokes in a very direct and brutal way the decapitation, and the straight and fixed look of the saint seems to have nothing to hide from us. In spite of everything, this sculpture continues to give off a mysterious aura, which gives it all its strange charm.