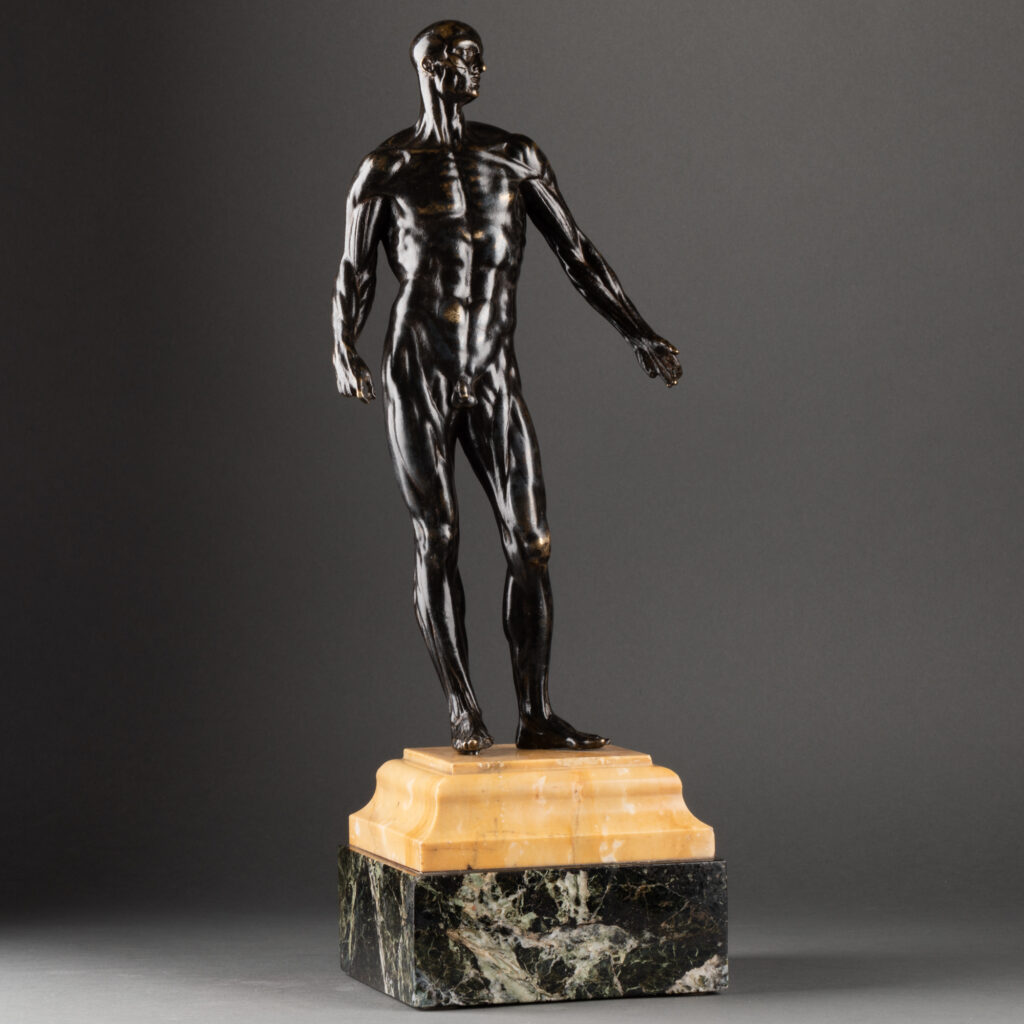 Standing in a slight contrapposto, the man turns his head to his left, his right arm follows along the body with the thumb and forefinger joined, the left arm is slightly open. This superb bronze skinner rests on a posterior base made of two types of marble: Sienna marble and antique green marble.

From the 16th century onwards, an unprecedented interest in anatomy developed in Italy, combining science and art in an unprecedented way. This rediscovery of anatomy implies many changes, especially concerning the almost “cartoonish” vision of the human body, inherited from ancient medicine. During the previous centuries, physicians and physicists believed that diseases resulted from an imbalance of the four humors constituting the body: blood, lymph, yellow bile and black bile. With this vision of medicine, anatomy played a very limited role due to a general misunderstanding of the role of the organs, the blood circulation system and a lack of knowledge of basic chemistry. But thanks to this new interest in anatomy from the 14th century and especially during the 16th century, a new science of healing developed based on a principle that we find in our modern medicine: if an organ is diseased, then the treatment must be applied to that organ rather than to the body as a whole.

This scientific revolution can also be observed, as is often the case, in artistic creation. Let us recall that at that time the manuscripts formerly copied by the monks were transformed into printed books and the technological revolution of printing allowed a fast and international production and diffusion of works. Being a science that requires the description of visual forms, anatomy needs images, especially images that can be reproduced with the precision of a print. This is one of the reasons why artists are involved. If printers and engravers were at first the major actors of this strange and unique interdisciplinary collaboration, some artists ended up becoming anatomists themselves: allowing them to develop an anatomical reality in their creations. Creating, independently of any medicine, anatomical images sometimes more advanced and precise than those produced by professional anatomists. It is only in the middle of the 16th century that “hard” science takes over and obtains total control over anatomical illustrations.

It is with great names like Michelangelo and especially da Vinci that the interest of artists for anatomy reaches its zenith: artist and complete scientist, Leonardo realizes numerous discoveries thanks to dissections, which allow him to refute ancient theories until then in place. As for Michelangelo, he studied anatomy exclusively to perfect his art but pushed his knowledge of the muscular system to the extreme. The study of muscles and skeletons becomes, from this moment, an important part of the artists’ training: a good knowledge of the human body for a better representation in art.

As said before, scientists end up assuming a dominant role in anatomical illustration. To name but one: Andreas Vasalius, a scientist who studied medicine in Paris and Italy, published De humani corporis fabrica (About the manufacture of the human body) in Basel in 1543. This work is the foundation of modern anatomy and contributes to the evolution of the representation of man and the living. In addition to its scientific content, which revolutionizes medicine, what makes this treatise exceptional is the fact that its author, although a scientist by training, supervises the illustrations made for his book: thus combining artistic quality with scientific rigor and precision. Illustrated by several artists such as students of Titian, Jan Calcar or Vasalius himself, this work is still considered one of the most beautiful books in the world thanks to the quality of its illustration plates. One of them represents a flayed man: staged in a bucolic landscape, a man standing without skin, which thus reveals his entire muscular system. This seminal work marks the beginning of a new period in medicine, but also appears to be the culmination of scientific thought dating from the 14th century.

The popularity of the book is also measured by the number of plagiarisms and partial copies that follow. Until the end of the 17th century, the majority of anatomy treatises include parts of texts and illustrations copied or inspired by the Fabrica. The plate of the écorché does not escape it and to quote only one: Gaspar Becerra realizes around 1556 a very similar écorché to illustrate the work of the Spanish Juan de Valverde de Amusco, Historia de la composicion del cuerpo humano. Through the creation and distribution of these copies, the representation of the flayed man became standardized: a man standing, his head raised and turned, one arm open and the other holding the piece of skin from his thigh that he had just torn off.

Initially confined to engraving and illustration drawings, the theme of the écorché reached other areas of artistic creation over time, including small bronze statues that were used as anatomical study models for students and apprentice artists. In the eighteenth and nineteenth centuries, the interest for the skinned animal evolved: it became an object of curiosity. The anatomical precision of the muscular system is sometimes diminished in favor of aestheticism, bronze is privileged to create objects of quality and prestige and above all the postures can vary (archer releasing an arrow, flayed man philosophizing on his own existence, athlete at rest…).

Our skinning is to be placed in this period of transition in the vision, representation and understanding of the human body. Perfect example of the object that intrigued collectors, it is striking for the great finesse of chiseling and its realism.