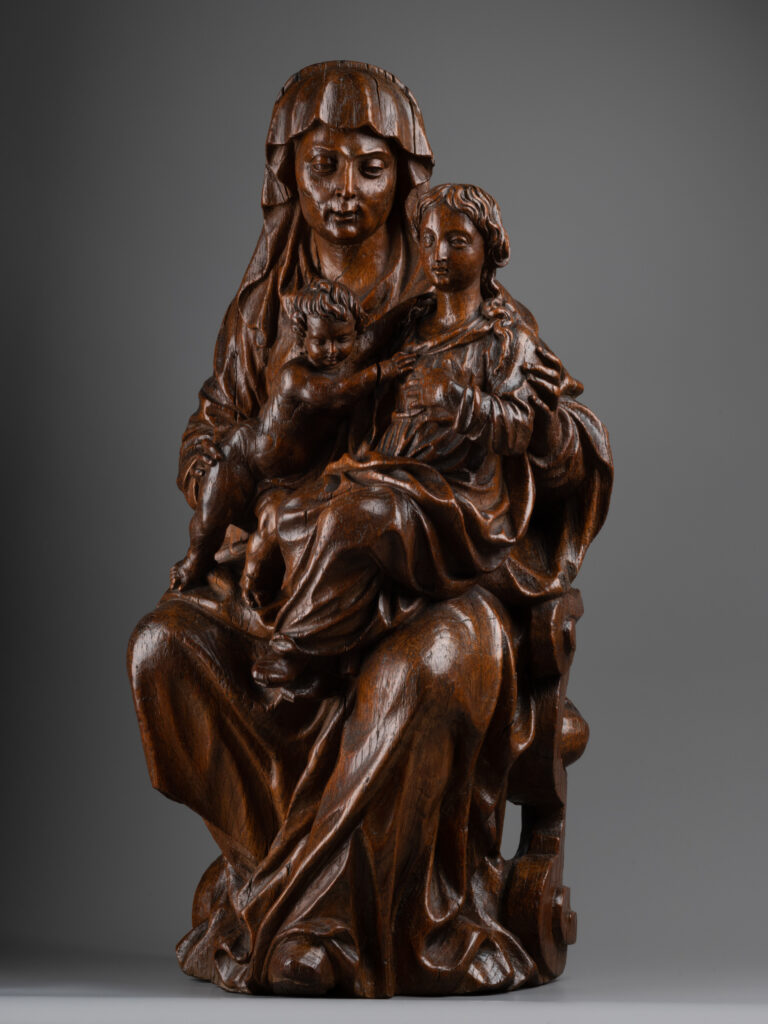 This beautiful oak sculpture depicts a Trinitarian Saint Anne, a devotional image that associates Grandmother Anne, Mother Mary and the Child Jesus. This motif developed within the framework of the cult of Saint Anne, mother of the Virgin, which spread in the 13th century. Absent from the biblical canonical texts, the figure and story of this saint come from the Greek apocryphal account of the Gospel of James, then from its Latin adaptation the Gospel of Pseudo-Matthew. However, it is thanks to the propagation of the Golden Legend by Jacques de Voragine that this image became established in popular culture.
As is traditional, the work adopts an anti-naturalistic character due to the figure of Mary, depicted at an age almost identical to that of her mother, but miniaturised in relation to the rest of the composition. In this way, the artist chooses to signify the physical dependence and subordination of Mary and Jesus to Anne. The theme of the Trinitarian St. Anne is indeed a means of recalling the divine incarnation through the establishment of the noble lineage and divine descent of Mary. Saint Anne is venerated as a saint because the Virgin’s birth is said to be the result of a miracle. Created in the 16th century, our sculpture is part of the heyday of the cult of Saint Anne, at the time of the controversy surrounding the Immaculate Conception. While in most homes the theme was in decline, it was to flourish in Northern Europe as a justification for the Virginal Conception of Mary.
Depicted in majesty on a throne, Anne shows here a certain protective dominance reinforced by her strictly pleated clothes which mark her advanced age and her status as a married woman. Her hair is covered with a veil, probably to signify her beguine costume.
The whole is softened by Mary’s tender gesture towards her son, her hair wavy and slightly untied according to medieval conventions. She is dressed in a long dress, similar to that of her mother, which refers to her humility. The Child is shown naked to indicate his human nature. He stretches out his arms in the direction of the Virgin, symbolising what separates the Son from the Mother, i.e. the future tragic destiny of the former and the duty of the latter to offer her son to the world.
The whole was carved from oak wood, probably by a Flemish sculptor, as suggested by the features of St. Anne’s face. The waves in the hair and the rounded body of the toddler suggest that the artist spent time in Italy. Some parts are openwork, especially the throne.
Sculptures depicting St. Anna Trinitarian were present in the domestic space as objects of personal devotion and adorned the outside wall of a house.
They could also be found in churches, flanked by altarpieces. These statues, often of medium size and polychrome, represent a symbolic vision of the episode which allows the Incarnation of God, the Immaculate Conception and the sanctity of Anne to be defended by implacable visual logic. This composition expresses the dominant role of Anne and the female line in the genealogy of Jesus, while at the same time offering a visual theological demonstration of a miraculous conception over two generations.