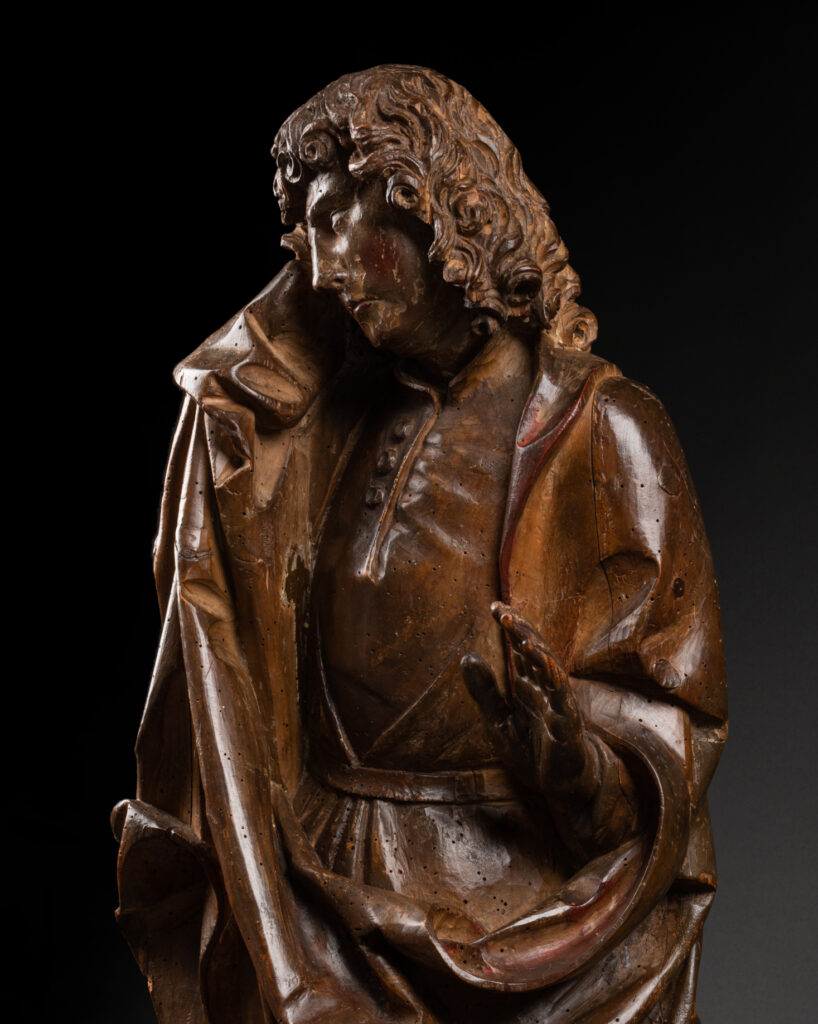 This beautiful limewood Saint John is characteristic of the artistic production of Bavaria in the late fifteenth and early sixteenth centuries. He has almond shaped eyes, small pursed lips, a curved nose, thick curly hair. He wears a traditional garment for men of the sixteenth century, tightened at the waist by a belt and covered with a large coat, whose folds and draping give the piece a striking realism. The saint is standing, barefoot, with his head turned slightly to his right, wiping his tears with a piece of his cloak with his right hand and raising his left hand in reaction to the scene he is observing. Indeed, the posture of St. John indicates that it was part of a larger set, made for an altarpiece: a scene of the crucifixion of Christ. According to tradition, John “the disciple whom Jesus loved” is present at the foot of the cross at the death of Christ, along with Mary. Still to the left of Christ, Our Lady and John, on the right, weep and lament together. The attitude of our Saint John expresses strong emotion and deep sorrow but also exudes great piety.
This work can be compared to the work of the German sculptor Daniel Mauch (1477-1540). Artist attested from 1508 in the city of Ulm (Baden-Württemberg) where he directed a workshop specialized in carved altarpieces in wood, he is known to have worked the last ten years of his life in the Walloon region. With the Protestant Reformation gaining ground in the German Empire, the demand for religious images collapsed, causing him to lose some of his customers. Faithful to the Catholic faith, he left the city of Ulm with his family when it declared itself Protestant. He settled in Liege where he worked until the end of his life and left a strong mark on the artistic scene of the region. The connection of our piece with this artist is reinforced by another work attributed to Mauch: a Saint Sebastian in lime wood, kept in the Petit Palais, dating from the first decades of the 16th century. The work of the hair, the folds of the garment, the bare feet on a base of grass, and the dignified but emotional face are elements that confirm our connection.
The quality of the wood, the traces of polychromy and gilding; added to the great finesse of the chiselling of this sculpture, offers us a representation of the most touching and elegant saint.