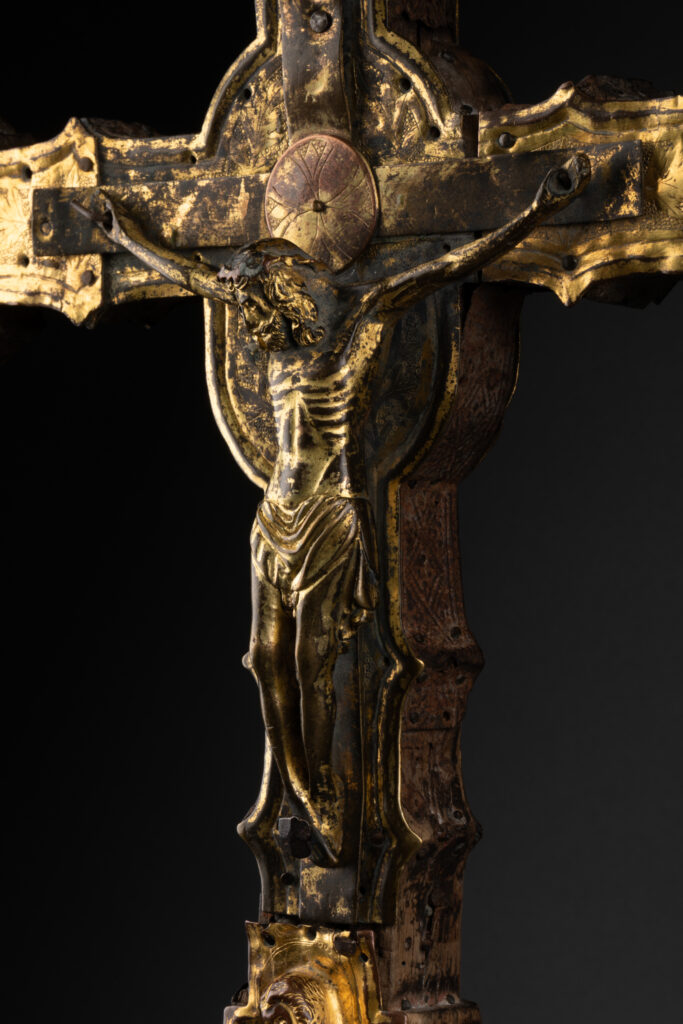 If this grandiose processional cross made between the 14th and 15th centuries is a magnificent object of aesthetic contemplation, we must not forget its primary utilitarian function. Carried high by the crucifer, who stood in front of the priest at the beginning of the mass, it played an important role in the Christian liturgy, reminding everyone of Christ’s role as good shepherd, opening the way to his faithful. The cross could then be detached from the pole, in order to be placed prominently on the altar during the ceremony.
Ultimate symbol of Christianity, the cross makes it possible to evoke, in a direct and direct way, the central event of the life of Jesus: his crucifixion at Golgotha. The richness of meaning of this symbol lies in its ambivalence. Tragic, expressing pain in the face of sacrifice and death, the cross also harbors within it the hope of the resurrection to come, as well as the promise of human salvation.
Possessing a universal character, since it is already found in certain ancient civilizations, notably in Mesopotamia, the cross acquires a new importance at the beginning of Christianity. Possessing a universal character, since it is already found in certain ancient civilizations, notably in Mesopotamia, the cross acquires a new importance at the beginning of Christianity. The gesture of drawing the sign of the cross on the forehead is one of the oldest Christian rites. Used during baptism, or drawn as a symbol of protection, it refers to a prophecy in the Book of Ezekiel (9:4-6): “Go through the middle of the city, and mark the foreheads of men with a tav ”. The tav evolves gradually, going from a ritual practice to the emblem of Christianity at the turn of the 4th century, after the conversion of Constantine following a dream where a cross in the sky would have predicted victory against the armies of Emperor Maxentius. The adoption of this symbol is reinforced by the spread of the legend of the invention of the relic of the “True Cross” by the mother of the Emperor Constantine. During the 4th and 5th centuries, this symbol began to adorn religious buildings. From the 6th century, the cross was regularly decorated with the figure of Christ, thus making it possible to combine the representation of the sacrificial victim with his instrument of martyrdom.
During the Gothic period in the 14th century, the production of crucifixes in Italy was concentrated in Lombardy, Veneto and the Adriatic regions. From a formal point of view, they are Latin crosses (the vertical arm at the bottom being longer than the other three arms). The arms of crucifixes tend to widen into trefoil ends; at the same time, a square panel is introduced at the junction of the arms. Gradually, this intersection changes from square to oval. The Lombard crosses of this period also began to adopt new contours, thanks to the arrangement of small balls at the level of the edge. If only the extremities of our cross are decorated with balls, small cavities in the wood make us think that other balls must have been placed, in an identical way to what we observe on this other Lombard cross from the same period.
This new form could refer to the image of the tree of life (arbor vitae), which was considered especially in the Middle Ages as the tree of Adam, and from which the wood of the holy cross was supposed to come, from a variant of the Legend of the Cross, distributed in Italy by Iacopo de Varagine (Giacomo da Varazze, circa 1228-1298).
From an iconographic point of view, the flat metal surfaces are decorated with stylized and chiselled leafy motifs on a background covered with tiny chisel-printed rings. On the front side, a statuette of Christ in gilded bronze is nailed to a thin cross fixed to the support plates.
Above Christ, we find the initials “INRI” from the Latin words “Iesus Nazarenus Rex Iudaeorum”, or “Jesus the Nazarene king of the Jews”, whom Pilate had put on the Cross (John, xix, 20). The ribs stand out clearly from the emaciated body. The legs are not turned and the overlapping feet are pierced with a single nail.
Christ is surrounded by Mary Magdalene at his feet, recognizable by her loose hair, as well as the evangelists represented by their respective symbols: the eagle for John, the lion for Mark, the Bull for Luke. On the back of the cross sits in the center a Christ Pantocrator, raising his right hand to render justice, and holding in his left hand an open book. At his feet is Saint Matthew, recognizable by his angel wings, while on the sides the Virgin and Saint John are represented in lamentation. At the top, a figure, probably an angel, stands facing in a position of adoration.
A comparison work carried out with other similar Lombard crosses of the same period allows us to affirm that all the peripheral characters have been inverted, except for the two figures located at the bottom of the cross (Mary Magdalene and Saint Matthew) which are are still in their original positions. Thus, Christ on the cross was initially to be surrounded by the Virgin, Saint John, Mary Magdalene and the adoring figure, in order to reproduce a scene of lamentation. On the other side of the cross, Christ Pantocrator was to be surrounded by the tetramorph, in other words the four evangelists.
The fact that this cross belonged to Gaston Louis Vuitton’s collection for many years reveals the art world’s interest in this inspiring and fascinating object, both simple because of its universal symbolism, and extremely elaborate because of its by its abundance of details and its beautiful finish.