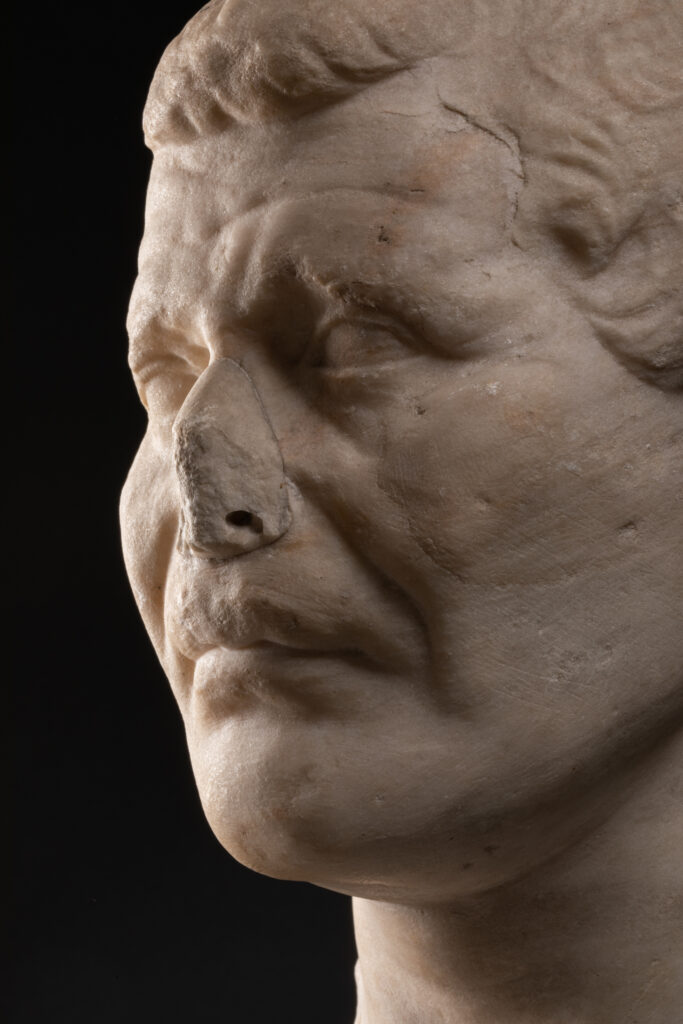 The facial features are marked: hollow cheeks, high cheekbones and a square jaw. The chin is wide and prominent, the mouth is closed and the lips are full and curved, creating a slight shadow. The eyes, in the shape of almond, are small and slightly turned in. The hair is thick on the front and bald on the temples. The whole hair is in thick ends and with a slight wave.
The mature and virile appearance of this figure, associated with the double chin, recalls the representations of Marcus Vispanius Agrippa.
Agrippa (?63 BC / 12 BC) was a Roman general, politician and close friend of Octavian (future Emperor Augustus): loyal friend, man of war, builder, son-in-law and heir apparent to the Empire, Agrippa was, under the reign of Augustus, of all combats.
Present alongside Octave from the death of Caesar in 44 B.C, Agrippa participates in the establishment of the principate and in the civil wars of the end of the Roman Republic. He was a major figure in the new conquests of the Empire, particularly in Hispania and on the Danube. 107 / 5 000 Résultats de traduction He distinguished himself many times in battle, and he commanded the fleet during the battle of Actium in 31 B.C against Antony and Cleopatra.
He married the daughter of Augustus, Julia, with whom he had five children, two of whom were adopted by the Emperor and made heirs. By the multiple matrimonial strategies of Augustus, Agrippa is thus the maternal grandfather of emperor Caligula, the maternal great-grandfather of Nero, the father-in-law of Germanicus (heir to the Empire), and grandfather of Agrippina the younger (wife of emperor Claudius).
Builder, he built baths on the Champ de Mars which will be bequeathed to the Roman people at his death (thus becoming the first public baths of the city), many temples, aqueducts, porticoes and theaters as well as many roads in Rome and the provinces, notably in Gaul where he was governor. He is also at the origin of the first pantheon of Rome started in 27 B.C. Very close to Augustus, he will constantly grant him powers, honors and responsibilities, almost making Agrippa a second emperor.
On the death of Marcellus, nephew of Augustus and principal heir; Agrippa in turn becomes heir apparent to the Empire. After a last conquest in the Danube region, he died in 12 B.C in Campania. To honor his friend, Auguste organizes a lavish funeral for him, similar to the one he plans for himself, and he mourns for more than a month. He also adopted Agrippa’s children and took care of their education. Although having prepared his burial, Agrippa will have the honor of seeing his remains rest in the mausoleum of Augustus, in the same way as the members of the imperial family.
Despised by the Roman aristocracy for his modest origins, but adulated by the plebs for his career and his qualities, Agrippa is recognized by ancient and contemporary historians as a great man, an excellent military man, a builder, founder of the Roman Empire and almost the equal of Augustus.
Provenance: private collection, where it remained from 1931 to 2017, before being left at the Red Cross and then sold.